For nearly 70 years, the Dad of the Year Award has recognized dads who have made an impact on their son’s and/or daughter’s collegiate experience at Washington State University.  This year, the award was proudly sponsored by BECU.

The awardee was announced during the Dad of the Year Brunch held at Banyans on the Ridge Event Center on Saturday, Nov. 16, 2019, during WSU Dad’s Weekend. The winner received a WSU sweatshirt, plaque, and admission to the President’s box for the WSU Dad’s Weekend football game vs. Stanford, two tickets total.

Congratulations to our 2019 Dad of the Year, Brandon A. Borchers! 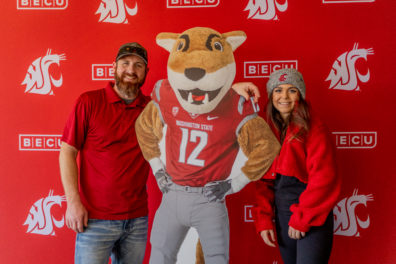 Nominations for 2019 Dad of the Year are closed, additional questions or concerns can be emailed to Student Involvement Coordinator, Phillip Sinapati: atfilipo_pls@wsu.edu